Identity and Neurodiversity
The Work of Sharif Persaud

Placing himself at the centre of his work, Sharif Persaud explores identity through his experience of contemporary life and autism. He is a part of the collective of neurodiverse artists and activists at Project Art Works, who have been shortlisted for the Turner Prize 2021. Persaud is profoundly interested in his body in society as a site of investigation: sneezing, healthcare, hospitals, gangrene, cities, flats, benefits and his independence. He questions his audience about their experiences and body - have you ever had?

Persaud's first solo exhibition Have You Ever Had was held at Autograph's gallery in London in 2020/2021, and featured his drawings, large paintings and award-winning short film The Mask. This powerful show was the culmination of the UK-wide EXPLORERS Project,﻿ highlighting the extraordinary contribution neurodiverse people make to art and culture.

﻿Set against a backdrop of increased hardship and marginalisation of vulnerable people, the﻿ Project was informed and led by neurodiverse communities, in collaboration with cultural organisations across the UK and in Australia. ﻿Persaud's exhibition was developed from Autograph's long partnership with Project Art Works and our participation in EXPLORERS Project. Read, watch and listen to artist Chris Miller's review of this work on our blog Read, watch and listen to Zara Joan Miller's review of this work on our blog Sharif Persaud: Have You Ever Had 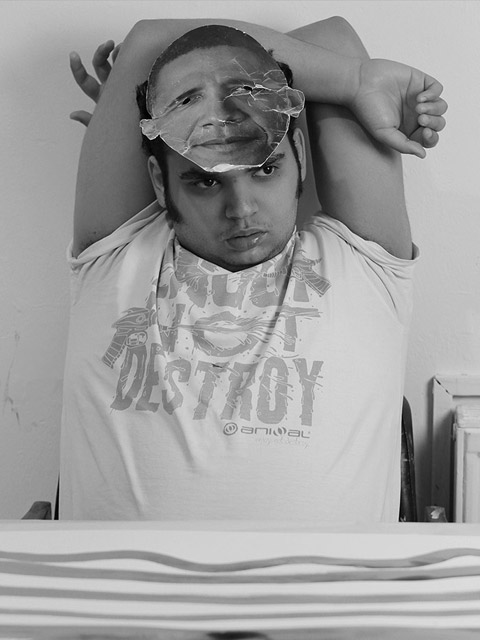 is an artist based in Hastings. His practice has been developed in collaboration with Project Art Works, where he has been a key contributor.

He wrote and directed The Mask (2017) an Ignition Random Acts Network Centre Commissioned film. The Mask won Best Story at the Oska Bright Film Festival in 2017, and has been shown at screenings across the world including FilmBath UK, the Other Film Festival in Melbourne, Electric Palace in Hastings, and the Discover Film Awards festival in London. It has also featured in a British Film Institute Collection Disabled Britain on Film. His work has featured in group exhibitions including In The Realm of Others (2015) at De La Warr Pavilion and Putting Ourselves in the Picture (2019) at Fabrica. He was a finalist for the 2020 Spectrum Art Award.

You can see more of Persaud's work on the Project Art Works website. Dismantling Intellectual Ableism﻿ in the Arts

Historically, the art world has not recognised or valued the work of neurodivergent artists﻿ Watch a Video Introduction to the Exhibition﻿ Purchase the postcard pack of Persaud's work﻿ in our online shop Out and About on Lockdown﻿﻿

A﻿ unique insight into the impact of lockdown on neuro-minorities During Covid-19, Persaud's exhibition resonated in ways we couldn't have predicted Available in our online shop

Sharif Persaud: Have You Ever Had was part of the EXPLORERS project, delivered by Project Art Works, a three-year programme of art and conversation working with 12 national art organisations. The EXPLORERS programme was informed and led by neurodiverse communities, placing them at the heart of social, civic and cultural activity.﻿