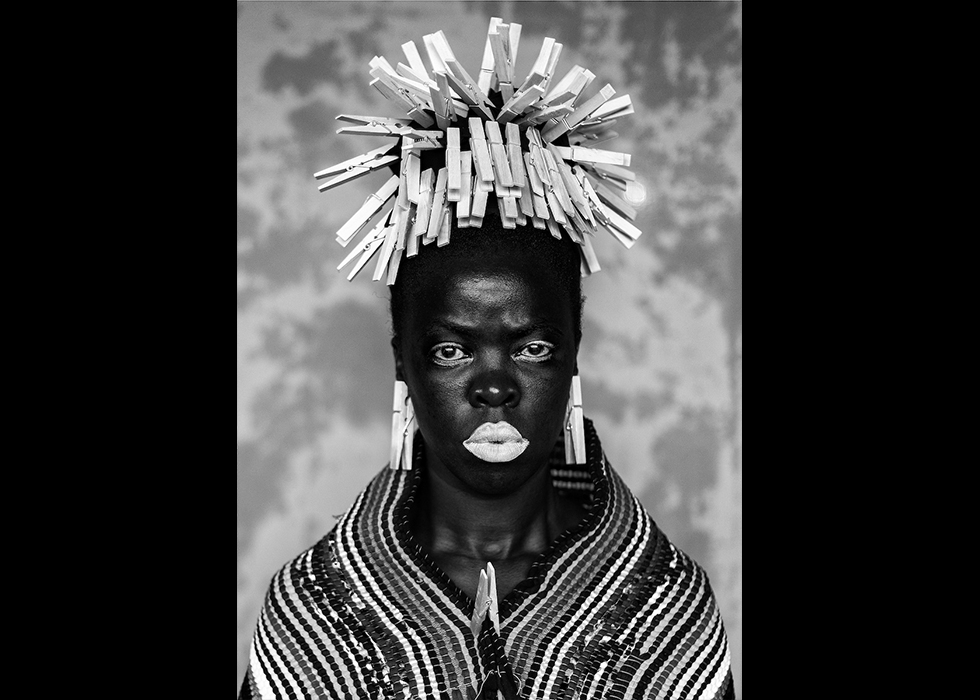 This exhibition may be closed or postponed due to concerns over the spread of COVID-19 (Coronavirus).

Please check the The Cooper Gallery website for updates.

Our powerful exhibition Somnyama Ngonyama, Hail The Dark Lioness is touring to The Cooper Gallery at Harvard University.

In more than 80 self-portraits, celebrated visual activist Zanele Muholi (South African, b. 1972) uses their body as a canvas to confront the deeply personal politics of ‘race’ and representation in the visual archive.

Each black and white portrait asks critical questions about social (in)justice, human rights, and contested representations of the Black body.
﻿﻿

Drawing on unique experiences, history and cultural memory, Muholi’s critically acclaimed ongoing series Somnyama Ngonyama – which translates to ‘Hail, the Dark Lioness’ from isiZulu, one of the official languages of South Africa – playfully deploys the conventions of classical painting, fashion photography, and the familiar tropes of ethnographic imagery to rearticulate contemporary identity politics.

Throughout the series, the dark complexion of Muholi’s skin is intensified through enhanced contrast applied in post-production, and becomes the focal point of a profound, multilayered interrogation of existential notions of ‘blackness and being’, beauty and pride – critically visualizing matters of self, care and perseverance in the light of the many interlinked phobias and isms navigated daily, especially by persons identifying as black, brown, female, queer, non-binary or trans: racism, sexism, homophobia, transphobia, and xenophobia, to name but a few.

Here, the camera becomes a cathartic tool of action and reclamation, and photography a therapeutic mode of survival. Taken between 2012 and 2019 in diverse locations in Africa, Asia, Europe, and North America, Muholi's socio-cultural radical brand of self-portraiture transforms found objects and quotidian materials into dramatic, historically loaded visual ‘props’ – merging the political with the personal.

At times commenting on specific events in South Africa’s past and its present, or drawing on their own family history, the works also point to universal concerns pertinent to our current times through a range of inherent symbolisms: scouring pads, blankets, and latex gloves address themes of domestic servitude while alluding to sexual politics, cultural violence, and the often suffocating prisms of gendered identities. Rubber tires, cable ties, or electrical cords invoke forms of social unrest, brutality and capitalist exploitation. Plastic tubes, hose pipes and polythene draw attention to environmental issues and global waste, as well as migration crises, and climate change; while accessories like cowrie shells and beaded fly whisks highlight continual Western fascinations with clichéd, exoticized representations of African cultures.

Gazing defiantly at the camera, Muholi – whose preferred gender-neutral pronouns are they / them / theirs – challenges viewers’ perceptions while firmly asserting cultural and sexual identities on their own terms.

“Somnyama Ngonyama presents a compelling and visionary mosaic of visual identities, an exquisite empire of selves. Inviting us into a multilayered, visceral exchange of “gazes”, each photograph in this ongoing series of auto-portraits, each visual inscription, each archival intervention, each confrontational narrative depicts a self in profound dialogue with countless others: implicitly gendered, resolutely non-conforming, culturally complex and historically grounded Black bodies… Muholi’s bold creative practice – both activist and remedial at its core – enables art, advocacy and human rights to converse symbiotically, especially poignant considering the current socio-cultural climates unfolding globally.” - Renée Mussai, Curator

"I’m reclaiming my blackness, which I feel is continuously performed by the privileged other. My reality is that I do not mimic being Black; it is my skin, and the experience of being Black is deeply entrenched in me. Just like our ancestors, we live as Black people 365 days a year, and we should speak without fear" 'Playing in the Dark': Photography, Arching The Self and Visual Activism

﻿At The Cooper Gallery, Harvard

Zanele Muholi is a visual activist and photographer based in Johannesburg. Muholi’s self-proclaimed mission is “to re-write a Black queer and trans visual history of South Africa for the world to know of our resistance and existence at the height of hate crimes in South Africa and beyond."

In 2002, they co-founded the Forum for Empowerment of Women (FEW), and in 2009 they established Inkanyiso, a platform for queer and visual (activist) media (www.inkanyiso.org). They continue to train and co-facilitate photography workshops for young persons in South African townships, and engage in a variety of community support programs locally and globally.

﻿Muholi studied Advanced Photography at the Market Photo Workshop in Newtown, Johannesburg, and completed an MFA in Documentary Media at Ryerson University, Toronto.

In 2013 they became an Honorary Professor at the University of the Arts/Hochschule für Künste Bremen. Select recent awards and accolades include the Humanitarian Award from for the Lucie Foundation (2019); Rees Visionary Award by Amref Health Africa (2019); an honorary fellowship from the Royal Photographic Society, UK (2018); France’s Chevalier de l’Ordre des Arts et des Lettres (2017); and ICP’s Infinity Award for Documentary and Photojournalism (2016). In 2019, Somnyama Ngonyama: Hail, The Dark Lioness (Aperture) won ‘Best Photography Book Award’ from the Kraszna-Krausz Foundation.

Their publications include Faces and Phases 2006-14 (Steidl/The Walther Collection); Zanele Muholi: African Women Photographers #1 (Casa Africa and La Fábrica, 2011); Faces and Phases (Prestel, 2010); and their first monograph Only half the Picture (Stevenson, 2006). Purchase in our online Shop With 20 texts exploring and responding to Somnyama Ngonyama