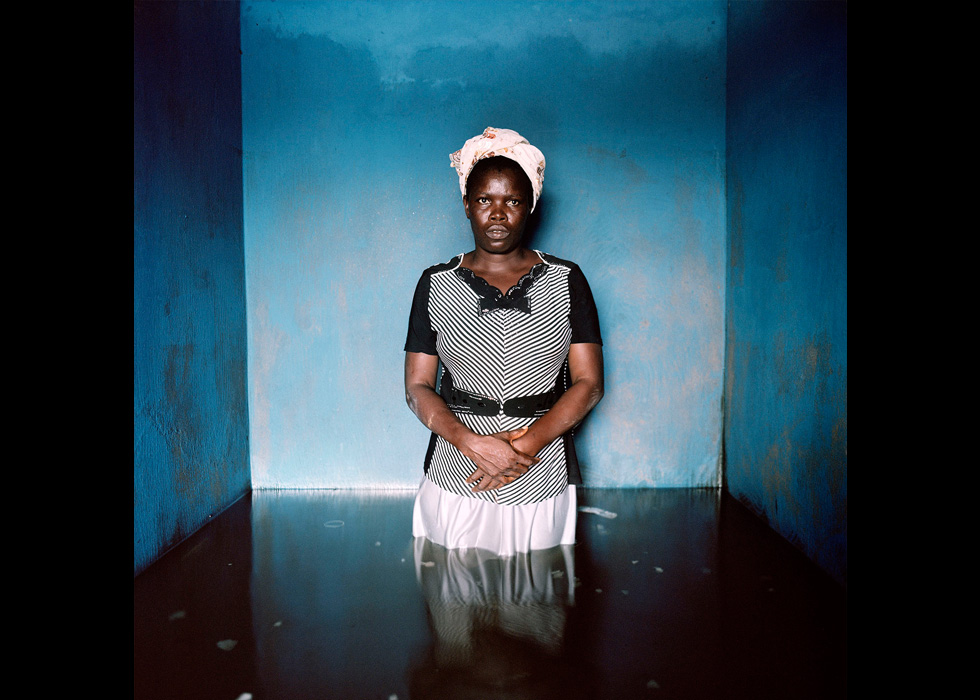 The photographs on display explore the human dimension of climate change by focusing on floods across geographical and cultural boundaries.

The Drowning World project consists of four related series. Rather than a literal depiction of disaster zones, Mendel focuses on the personal impact of flooding to evoke our shared vulnerability to global warming and question our sense of stability in the world.

The series ﻿Submerged Portraits are intimate portraits of flood victims. Their poses may seem conventional but their unsettling gazes challenge us to consider their context.

The Floodlines series records the physical incursion of rising water through intimate living quarters and public spaces, presenting a paradox of order and calm within chaos.

Watermarks is a series consisting of enlargements of flood-damaged personal snapshots, sometimes anonymous flotsam fished from the water or mud, sometimes given by homeowners. Through floods, chemical interaction with water—ironically, essential to developing photographs— Mendel has transformed these private moments into metaphors of our exposure to environmental disorder.

Tideline presents this collection as a framed archive of archaeological memory. The video component of Drowning World, The Water Chapters, explores the tension between the frozen photographic moment and the perpetual movement and uncertainty of dystopian, post-flood environments.

Gideon Mendel (b. 1959, Johannesburg, South Africa) is a leading contemporary photographer, whose intimate style of image-making and long-term commitment to projects, has earned him international recognition and many awards, including the Pollock Prize for Creativity.

He is renowned for his work as a ‘struggle photographer’ and his 20-year photographic odyssey on the impact of HIV/AIDS. This project culminated with the publication in 2001 of his first book, A Broken Landscape: HIV & AIDS in Africa.