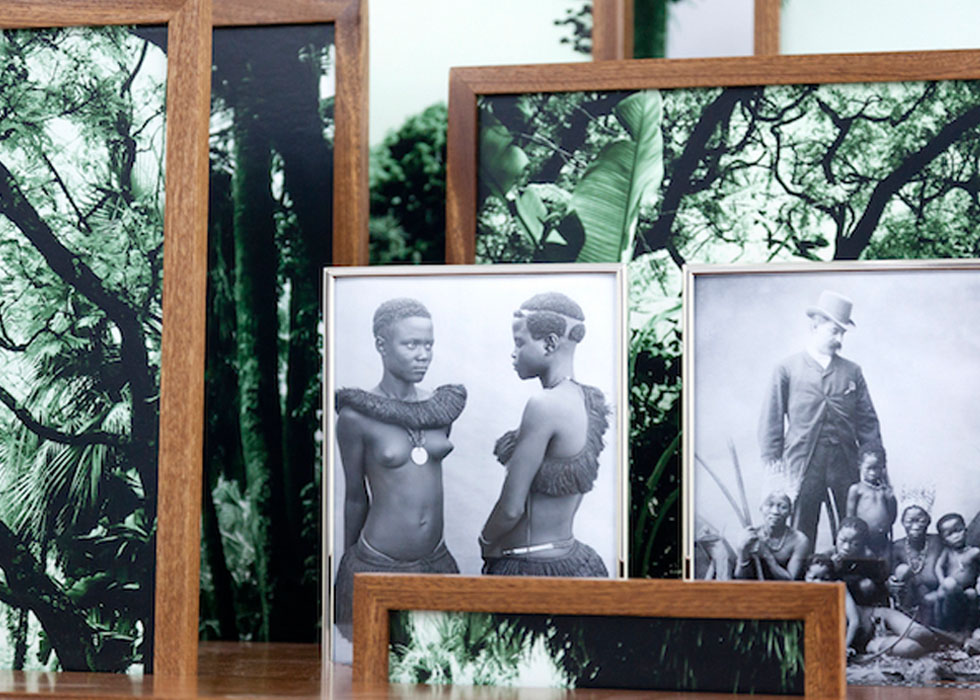 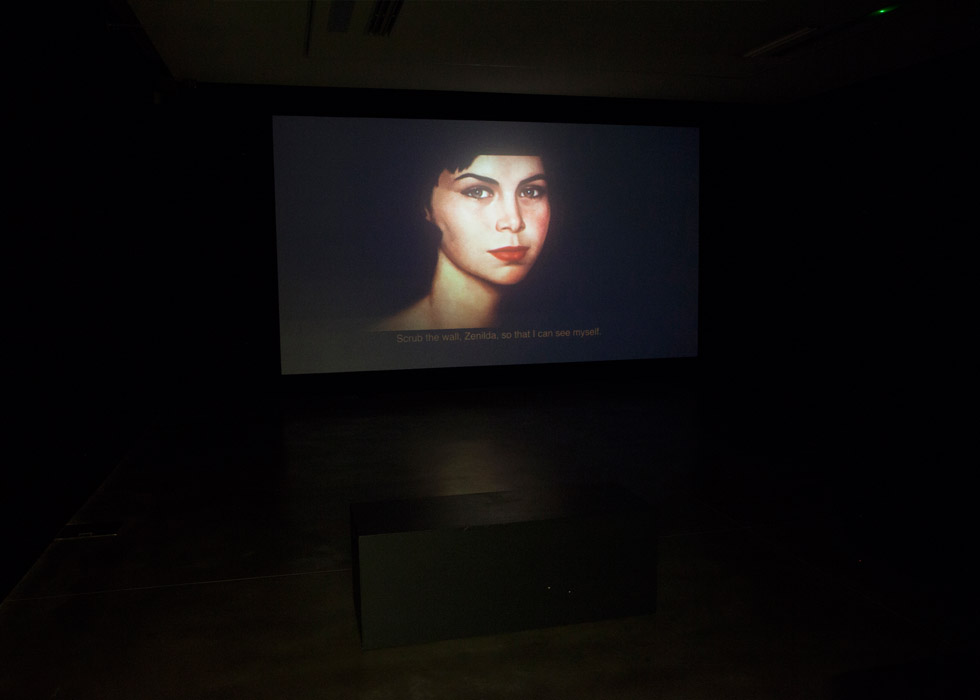 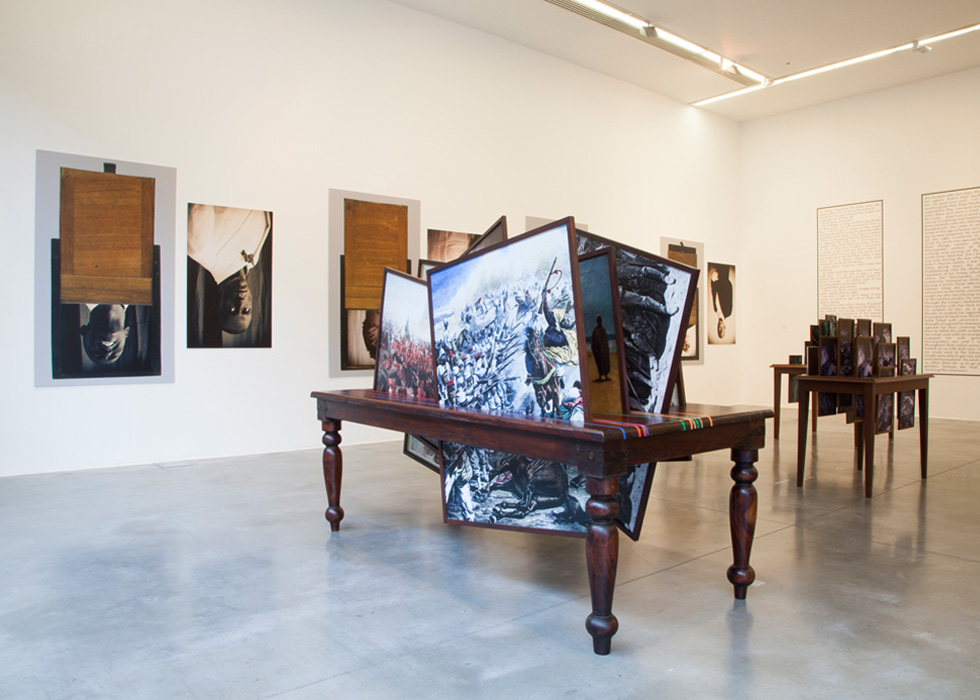 In this first solo exhibition in the UK, Portuguese multimedia artist Vasco Araújo uses photography, video and sculpture to explore how the trauma of the colonial encounter continues to haunt the modern world.

Originally trained as an opera singer, Araújo pursued degrees in Sculpture and Visual Arts. Since then he has expanded his artistic practice to include painting, drawing, film and video, performance, site specific installations as well as sound. ﻿ Araújo’s works are firmly grounded in European classical culture, taking cues from operas such as Guiseppe Verdi’s Aida, as well as works of literature such as Shakespeare’s Hamlet and Homer’s The Odyssey.

Araújo reinterprets and reinvents these historical works to comment on current social norms and values, with a keen focus on the marginalisation of minorities.The result is often a subversion of the original message, questioning issues of race, class and gender.
These subversive acts are typified in Araújo’s É nos sonhos que tudo começa (2014) (It is in dreams that all begins). Here the artist reworks extracts from the novel Yaka by the Angolan author Pepetela and the memoir Cadernos de memórias coloniais (Notebook of Colonial Memories) by Portuguese writer Isabela Figueiredo.

The artist describes his method as a ‘guerrilla tactic’, using the status of the original artworks to legitimise the message of his reinterpretations. Recurring themes in Araújo’s work are the fluidity and the performative nature of gendered identities, the reconstitution of erased voices, and the exercise of agency, power and control, often through the prism of sex and desire.

‘I want people to react with emotion. I hope that they not only get passionate, but also feel like they’ve been punched in the stomach. Discomfort, that is what I want, because discomfort provokes internal questioning.’ - Vasco Araújo

In his practice Araújo focuses on the colonial history of Portugal. Originally at the forefront of colonisation in the 16th and 17th century – a result of the country’s leading role in the discovery of the Americas – its influence rapidly waned from 1800 onwards. However, as part of the ‘Scramble for Africa’ (1881–1914) by the various European powers, Portugal managed to consolidate its holdings in Africa during the latter part of the 19th Century.

Araújo’s sculpture Ethos (2016) features photographs of European heads of state slicing through a table. Tables – along with their domestic, private significance – form the centrepiece for negotiations, where treaties are drawn up and the destinies of entire nations decided. The works suggest a parallel with the way the colonial powers divided the African continent at the Berlin Conference of 1884–5, which marked the climax of the European competition for territory in Africa.

Portugal’s colonial history is also referenced by Araújo in his series of sculptural dining tables Botânica (2012–2014). Here he juxtaposes photographs of botanical species from the tropical gardens of Lisbon – originally called the Colonial Garden – with archive photographs produced during the period of African colonisation. Additionally, Botânica’s ‘forest of images’, lock natural and human species in the same systematic, hierarchical visual violent regime of the colonial gaze.

The sculpture Infinity Memory (2016) – shown with Ethos here for the first time – comprises a display table with several slim drawers that visitors can pull out to examine pages from a 19th century photo album.

In his photographic self portraits Capita (2012) Araújo subverts politics of identity, gender, and ‘race’ through his embodiment of various 19th century black personae, playfully interrogating his own post-colonial gaze in this restaging of the colonial encounter.

‘Vasco Araújo is part of a generation of contemporary artists who question and critically investigate colonial histories. His work throws an uncomfortable light on the unrelenting violence, that was an inherent part of Europe’s colonial order.’ - Mark Sealy

The exhibition continues in the second floor gallery, where six videos are shown. They each examine history through the narrative frameworks of mythological tales, the plots of operas and everyday anecdotes to focus on the making of cultural stereotypes and the marginalisation of people regarded as ‘different’.

"Calls into question the colonial gaze"

Vasco Araújo (b. Lisbon, 1975) lives and works in Lisbon, Portugal. He works in a variety of media, including painting, drawing, film, video, performance, site specific installations and sound.