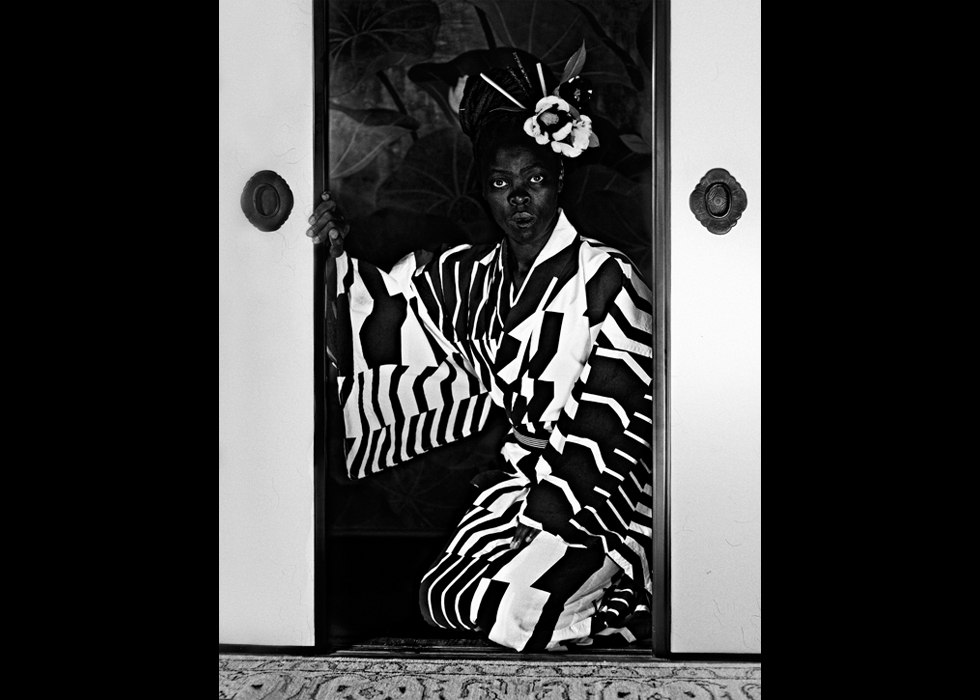 See an iteration of our exhibition Zanele Muholi: Somnyama Ngonyama, Hail the Dark Lioness in a new three-artist group show, alongside works by Claude Cahun and Samuel Fosso.

Claude, Samuel, Zanele explores self-portraiture and how each photographer addresses issues of politics, race, gender and identity in their work.

Thirty-five works by Muholi are in the exhibition, including four works commissioned by Autograph in 2017 and from our permanent collection.

Visual activist Muholi uses their body as a canvas to confront the politics of race and representation in the visual archive. Read More

In Somnyama Ngonyama, which translates to 'Hail The Dark Lioness' in isiZulu, Muholi playfully employs the conventions of classical painting, fashion photography, and the familiar tropes of ethnographic imagery to rearticulate contemporary identity politics. Each black and white self-portrait asks critical questions about social injustice, human rights, and contested representations of the Black body.

Muholi states: “I’m reclaiming my blackness, which I feel is continuously performed by the privileged other. My reality is that I do not mimic being Black; it is my skin, and the experience of being Black is deeply entrenched in me. Just like our ancestors, we live as Black people 365 days a year, and we should speak without fear."

By increasing the contrast in post-production, the dark complexion of Muholi’s skin becomes the focal point of interrogations of beauty, pride, desire, and interlinked phobias and isms that must be navigated daily such as homophobia, transphobia, xenophobia, racism, and sexism.

The photographs were taken between 2014 and 2017 in Europe, North America, Asia, and Africa. In Muholi’s work, found objects are transformed from the everyday into dramatic and historically loaded props, merging the political with the aesthetic. Scouring pads and latex gloves address themes of domestic servitude while alluding to sexual politics, violence, and the often-suffocating prisms of gendered identity. Rubber tires, cable ties, or electrical cords invoke forms of social brutality and exploitation, often commenting on events in South Africa’s history. Materials such as plastic draw attention to environmental issues and global waste. Accessories like cowrie shells and beaded fly whisks highlight Western fascinations with clichéd, exoticized representations of African cultures.

Gazing defiantly at the camera, Muholi challenges viewers’ perceptions while firmly asserting their cultural identity on their own terms. Read more about the exhibition﻿

Zanele Muholi (South Africa, b. 1972) is a visual activist and photographer based in Johannesburg. Muholi’s self-proclaimed mission is “to re-write a Black queer and trans visual history of South Africa for the world to know of our resistance and existence at the height of hate crimes in South Africa and beyond.”

Muholi co-founded the Forum for Empowerment of Women (FEW) in 2002 and Inkanyiso (www.inkanyiso.org), a forum for queer and visual (activist) media, in 2009.

Muholi studied Advanced Photography at the Market Photo Workshop in Newtown, Johannesburg, and in 2009 completed an MFA: Documentary Media at Ryerson University in Toronto. In 2013, they became an honorary professor at the University of the Arts/Hochschule für Künste Bremen. Most recently, Muholi was bestowed France’s highest cultural honor, the Chevalier de l'Ordre des Arts des Lettres. They were included in the South African pavilion at the 55th Venice Biennale (2013) and took part in the São Paolo Biennial (2010) and documenta 13, Kassel (2013).

They are represented by Yancey Richardson, New York, and Stevenson, Cape Town/Johannesburg.

FOMU houses one of the most significant photo collections in Europe. The museum’s displays change every four months, showcasing photography as a medium that is part of a broader social and cultural context. A selection of works in Zanele Muholi: Somnyama Ngonyama, Hail the Dark Lioness have been loaned from the Luma Foundation.