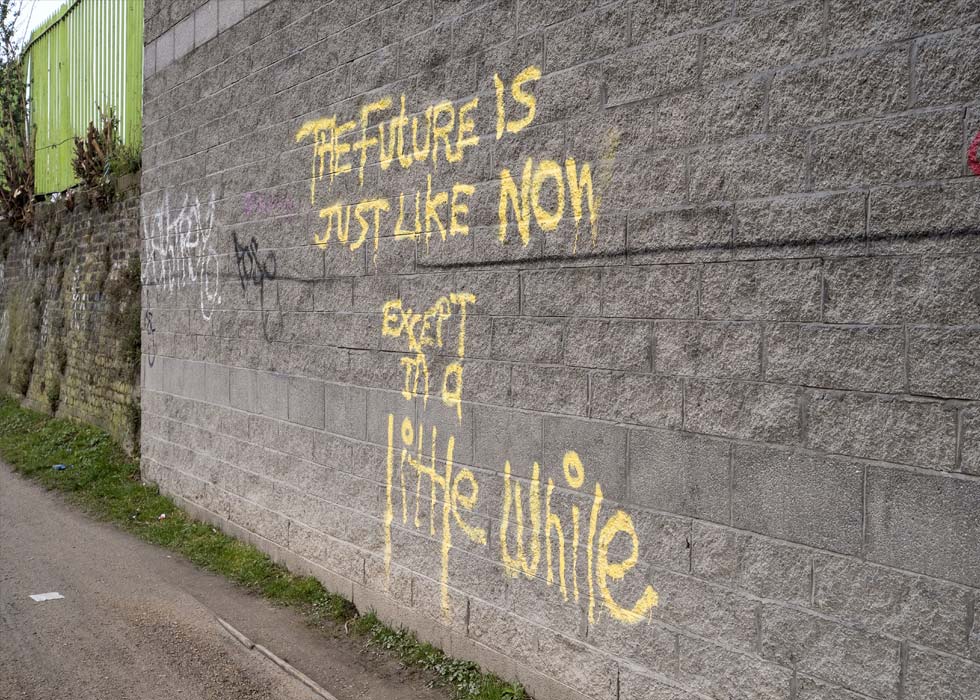 Autograph's new online course PILOT (Platform for Independent Learning Online Together), is based on collaborative learning and working together through issues of rights, care and future. This course and platform offers exchange, mentoring and development for artists in times of uncertainty.

The upheavals of the current moment present challenges and potentials. How are we dealing with experiences of exclusion, marginalisation and precariousness? How can we imagine new structures and futures for being together, learning and making? If not now, when?

Artists and creative practitioners at any stage of their career, or level of experience, were invited to apply. The course is limited to 16 places, in order to facilitate collaborative learning.

Applications are now closed for this course

30 Sept
Course start date. The course will run for 12 weeks﻿

The course will run over 12 weeks (28 hours total) and include talks from invited speakers, one-to-one mentoring, group presentations and discussion. Participants will be encouraged to respond creatively to the themes of rights, care and future, sharing their ideas and practices. PILOT will culminate in a public online sharing with a dedicated website.

PILOT aims to open a space of agency and hope. To find energy rather than despair, to diminish distance in times of social distancing, and a common space to flourish.

Fees for this course are £100 / £80 concessions. We are aware that due to unjust economics, fees for this course might be a barrier for some people. If this is the case, get in touch with us to talk about how we could make the course accessible to you. Kate Adams is a visual artist, co-founder and director of Project Art Works. Project Art Works explores and promotes new practical and philosophical approaches to the meaningful involvement of people who have complex needs in visual art activity that finds its way into mainstream programming and is of exceptional quality in its concept, aesthetic and production. Read More

She has initiated many responsive, collaborative projects with artists, galleries, psychologists, children and adults who have severe neurological impairment and their families. Kate’s experience as a parent activist and the mother of a man with complex needs is central to the organisation’s responsive and informed approach. It requires a high degree of knowledge and sensitivity to the ethical issues arising from the inclusion of people who cannot knowingly consent to their involvement in art and culture.

Phoebe Boswell is a multidisciplinary artist who creates immersive installations and bodies of work which layer drawing, animation, sound, video, and interactivity, to house, centre, and celebrate the nuance and complexity of communities, voices, hearts, and histories which, like her own, are often systemically marginalised, simplified, pacified, homogenised, or sidelined as 'other'. Phoebe Boswell studied at the Slade School of Art and Central St Martins and currently lives and works in London. In 2019 she received a Paul Hamlyn Foundation Award for Artists and was the 2019 Bridget Riley Drawing Fellow at the British School at Rome.Read More She is a Ford Foundation Fellow, and is represented in the United States by Sapar Contemporary, New York. Her work has been widely exhibited: with galleries including Autograph, Iniva, the Royal Academy, Kristin Hjellegjerde, Carroll / Fletcher, and Tiwani Contemporary; art fairs Art15, 1:54, the Armory, and Expo Chicago; and has screened at Sundance, the London Film Festival, LA Film Festival, Blackstar, Underwire, British Animation Awards, and CinemAfrica amongst others. She participated in the Göteborg International Biennial of Contemporary Art 2015, the Biennial of Moving Images 2016 at the Centre d'Art Contemporain in Geneva, and received the Future Generation Art Prize's Special Prize in 2017, consequently exhibiting as part of the Collateral Events programme at the 57th Venice Biennale. Boswell is one of the selected artists for the next iteration of Prospect New Orleans and her first public artwork PLATFORM (2020), commissioned and produced by the Fonds cantonal d'art contemporain, Geneva, for the Mire Program, was unveiled at Lancy-Bachet Railway Station in Geneva in July 2020. Lola Olufemi is a black feminist writer, organiser and Stuart Hall Foundation scholar from London. Her work focuses on the uses of the feminist imagination, its relationship to political demands and futurity. She is author of Feminism Interrupted: Disrupting Power (2020) and a member of 'bare minimum', an interdisciplinary anti-work arts collective.

Dr Gregory Sholette is Professor at Queens College, CUNY, where he co-directs the Social Practice Queens art and social justice initiative with Chloë Bass. A graduate of the Whitney Program in Critical Theory (1996), UC San Diego (MFA: 1995), The Cooper Union (BFA: 1979), Sholette received his PhD in Heritage and Memory Studies from the University of Amsterdam,The Netherlands (2017).Read More He is co-founder of several artists' collectives including Political Art Documentation/Distribution (1980), REPOhistory (1989), and Gulf Labor Coalition (2010), as well as the curator of Imaginary Archive, a collection of documents about a past whose future never arrived, as well as author of the books Dark Matter (Pluto, 2010), Delirium and Resistance: Activist Art and the Crisis of Capitalism (Pluto, 2017), and Art As Social Action (with Chloë Bass, SPQ, 2018). Ali is a London-based artist and educator. He manages the Learning & Participation programme at Autograph, leading engagement projects exploring representation, identity and human rights for diverse groups including children and young people, students and community groups.

Ali is a Lecturer in Fine Art at Goldsmiths, University of London, and graduated from Goldsmiths with an MA in Visual Sociology in 2013 and a BA in Fine Art Practice in 2010. He is one half of Lloyd Corporation, a collaborative project with artist Sebastian Lloyd Rees, exhibiting nationally and internationally working in sculpture, installation, performance and text.

Alberto is an artist, university lecturer and independent researcher whose work is situated between art, urbanism and social practice. He is a Lecturer at Middlesex University and runs the BA/MA Fine Art and Social Practice with Loraine Leeson. He has published papers, articles and artworks in books and journals, as well as publishing his own photographic books.

In 2016 he was the Leverhulme Trust artist in residence at University of East London UEL with the project Music for Masterplanning in Anna Minton’s MRes Course 'Reading the Neoliberal City'. The book from the project Regeneration Songs: Sounds of investment and loss from East London is now out on Repeater Press.

Most recently he has delivered in multiple sites and situations the workshop ‘Talking Ghosts: a collaborative hoarding novella’ in which participants write together whole scripts for new development hoardings in London. Since 2014 he is also working as part of the DIG Collective.

Watch an interview with Alberto, discussing his interest in artists’ methods of self-organisation and working within co-operative structures

What do you mean by artists and practitioners?
We use the words ‘artist’ and ‘practitioner’ as broad terms to include anyone who wishes to develop their creative practice, to return to it after some time or renew their belief into wanting to be one. The ethos of PILOT is to be open and inclusive for a diverse range of creative practitioners. If you have any queries about whether this course would be suitable for you please contact Ali Eisa at ali@autograph-abp.co.uk

How will the course be taught?
This is a live online course and we will be using Zoom.
What you will need is:
• A reliable internet connection
• To download the Zoom application
• A computer with microphone and camera is best (e.g. a PC / laptop / iMac / MacBook), or a tablet / iPad if you don't have a computer
• Earphones / headphones / speakers

What do the different sessions involve?
PILOT has 3 modes of delivery:
• Talks are delivered by invited speakers and course leaders to inform the three course themes with examples of leading practice, prompts, readings and essential references.
• Tutorials are one-to-one sessions with course leaders lasting 45 minutes. These are mentoring opportunities for participants to discuss their creative responses and receive feedback as the course progresses.
• Sharing sessions involve participants presenting their work / research / ideas to the wider group for feedback and discussion.

What do you mean by creative response?
We encourage participants to make 'creative responses' throughout the course. Because PILOT invites the widest range of practitioners, we are completely open towards what these creative responses might be. These are not limited to any specific medium or art form. They can be drawn from your existing practice or projects or your own challenges to them. Or they can be entirely new things you are making directly informed by PILOT’s sessions and themes.

Is PILOT an accredited course?
No. PILOT is not an accredited course but the course will offer its participants:
• Our dedicated attention and personal advice for your practice development through mentoring
• All recordings of talks by invited speakers and our sharing sessions
• A shared resource with relevant texts, media and teaching materials presented throughout the course
• Public exposure for your practice through the PILOT website and Autograph's channels
• An awareness and positioning of your practice within the context of cultural production
• An opening into a new commonality with your peers

Have any more questions? We’d love to hear from you, email Ali Eisa ﻿at ali@autograph-abp.co.uk

﻿With special thanks to Jane Trowell, art educator, researcher and member of platformlondon.org