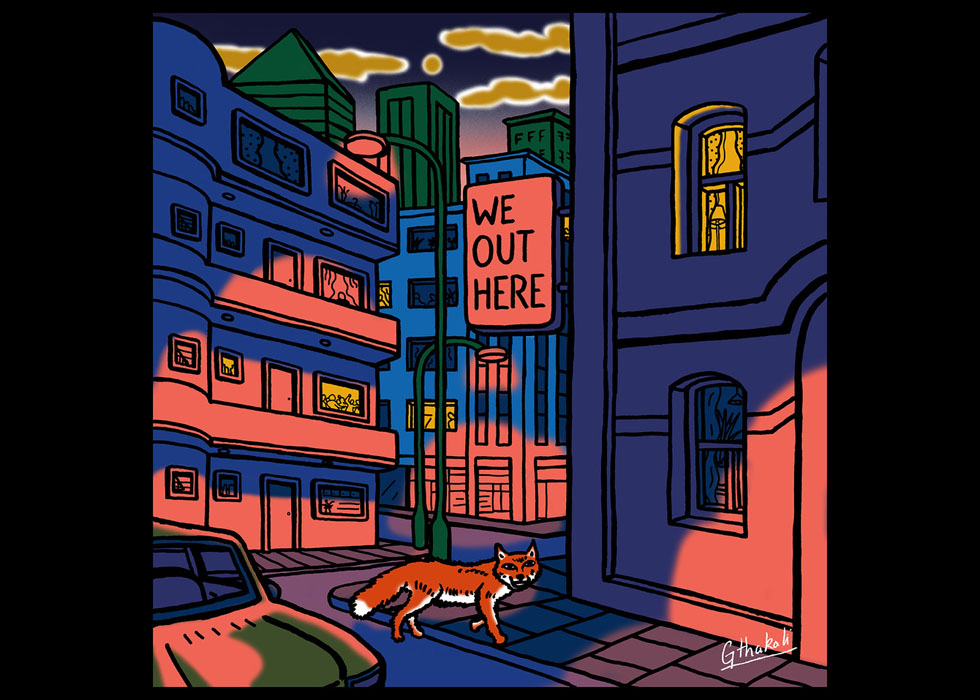 This exciting evening will push the boundaries of jazz, cutting through the restrictive connotations of a genre based solely on composition and instrumentation.

London is bustling with young multidisciplinary musicians and artists that are refusing to embrace the conventions of genre and style. At the forefront of this musical proliferation is jazz. The musicians responsible draw their influences from a range of artists, places, and eras to weave together a new narrative that embodies the richness of London’s multicultural diversity.

The revised flows of London jazz are historically referential and newly liberated. They tell the stories, aspirations, struggles, hopes, grief and triumphs of a rising generation of urban lives — in new tempos, eclectic voice, electronic, and instrumental forms.

Join us as we explore how the complex language of jazz informs and represents society, and its relevance to other creative practices.

We’ll start with a screening of Fabrice Bourgelle’s film We Out Here: A LDN Story, a document of some of the people and places who are reshaping Jazz in London’s image.

After the screening, a panel of speakers will engage in a conversation with the audience, and share their insights on the movement.

The evening will end with a live performance by special guests Neue Grafik and Project Karnak.

Alex Rita﻿ When not making her own clothes or drawing, Alex Rita spends her time immersed in another passion; patching together percussive grooves and organic sounds aimed at the soul and feet. Along with Errol, Alex Rita is one of the main forces behind Touching Bass: a movement of London-based soul disciples who hold down a biweekly NTS Radio slot, an innovative discussion/live music series called Speaking In Sound and a regular dance (specifically not called a party and communicated via texting service) among other creative endeavours. Alex is also a key member and vocal backbone of Steam Down, London’s most exciting weekly live night and a hub for the best musicians both local and beyond. She is one half of soul-pop duo Okapii who are releasing their debut album on Fresh Selects.


Since the brand’s genesis, Nicholas has continually explored his dual-ethnic heritage, widely questioning and reflecting on the notion of multiculturalism within the British identity. Placing great significance on craftsmanship, all production is retained within the UK and Nicholas works with internationally recognised manufacturers to create bespoke textiles that redefine a vision of what we might associate with British heritage. Nicholas charges his collections with authenticity and music informs his practice as a form of inspiration and expression.  Fabrice Bourgelle is a photographer/director documenting people, movements and communities across various cultural factors and continents. Fabrice has spent the past decade collaborating and providing imagery for Musicians and Artists from a range of practices. He also works on local issues with marginalised communities from Brazil, South Africa, Indonesia, Algeria, and Lebanon - with a major focus on India. Music was his first entry point into his creative practice, leading him to release the first official documentary on the current London Jazz community.Moses Boyd is a drummer, composer and Producer. He has been awarded two MOBO Awards, The John Peel 'Play more Jazz Award’ from the 2016 Gilles Peterson Worldwide Awards, and the 2014 worshipful company of music young jazz musician of the year. Moses has worked and collaborated with artists including Lonnie Liston Smith, Ed Motta, Little Simz, Four Tet, Floating Points, Sampha, Zara McFarlane, Gilles Peterson, and many more. He leads his own outfits The Exodus and Solo Exodus infusing Jazz, grime and electronic influences. Moses also releases music under his label Exodus Records, and is a resident on BBC Radio 1xtra.

Kerian Magloire﻿ is a professional Photographer, Curator and Content Developer at Shades of Noir, an educational and commentary platform for equality and social justice. With a focus on interrogating histories and contemporary subcultures, Magloire is currently developing a documentary film series exploring how London’s contemporary music scene reflects London’s diverse cultural expressions and identities, particularly its underrepresented and sometimes marginalised communities. He also has a background in radio hosting and music event production, prior to these engagements, Magloire was a professional footballer with several high-level youth club football teams.

Emma-Jean Thackray repped by Gilles Peterson, RBMA, Sounds of The Universe and many more, rising mega-talent Emma-Jean Thackray wears many musical hats. As a composer, producer, multi-instrumentalist, singer, bandleader and DJ, she is just as at home working with the London Symphony Orchestra as she is hosting her show on Worldwide FM or tearing it up on trumpet with her quartet. Recent solo release Ley Lines on The Vinyl Factory follows Emma-Jean’s acclaimed Walrus EP and maintains her trajectory as one of the most talented young musicians in the business. “UK jazz prodigy” – i-D

﻿IN PARTNERSHIP WITH LEFT FROM CENTRE

Left From Centre connects audiences with unsung subcultures in the UK﻿.﻿ Through﻿ commentary, film, ﻿and events they﻿ build recognition and support for emergent﻿ creative talents in the greater London community.

Culture Is, Culture Ain't is curated by Kerian Magloire on behalf of Left From Centre