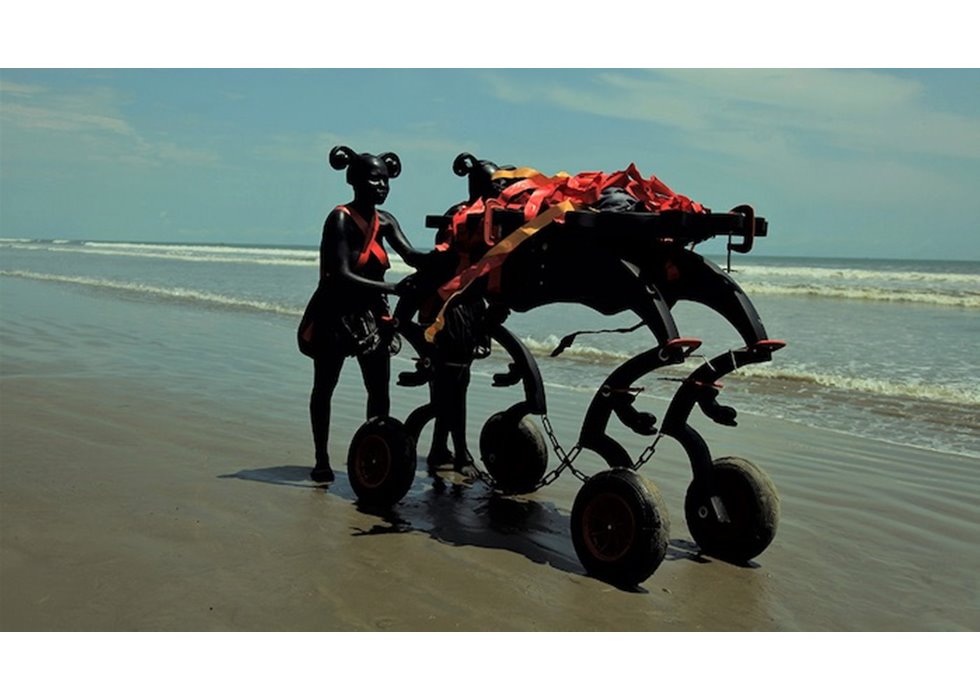 Composing A Cause: A Meditative Sonic Visual Experience

This event will take place online using YouTube and Zoom

You are welcome to join us from anywhere﻿, ﻿ the event will start at 6pm BST (GMT+1)﻿

About the Event About the Collaborators How to Join This Event

Update: Due to a family bereavement among the performers we will not be able to run the performance element of tonight's event. We will be going ahead with the film screening, followed by the conversation, with a finish time of 7.30pm rather than 8pm. We are still aiming to share the performance with everyone who has booked via our website, and will update as soon as we can.

Autograph and artist Wilfred Ukpong invite you to build a visual and sonic relationship with the Niger Delta through film, speculative soundscapes, performance and conversation.

The Niger Delta incorporates Ukpong’s homeland in Southern Nigeria. Once a major producer of palm oil for British colonisers, the territory is considered the mainstay of the Nigerian economy for its large oil reserves and its rich biodiversity due to the presence of rivers, mangroves, freshwater forests, and marine estuaries. In recent years, the region has been at the centre of environmental justice campaigns, with concerns over pollution caused by major spills and flares at the hands of oil and gas industry giants.

Ukpong’s current project, FUTURE-WORLD-EXV, explores aspects of Afrofuturism and mysticism, combining compelling and poetic reflections on the current crisis of environmental degradation and exploitation in the Niger Delta. Drawing on his historical and personal archives, ecology politics and indigenous environmentalism, this meditation on the crisis demonstrates how artmaking can be used as a tool for social empowerment and to challenge colonial narratives.

The event will consist of three tributaries, leading us to the Niger Delta: ONE: FUTURE-WORLD-EXV
A FILM SCREENING

A screening of FUTURE-WORLD-EXV (2019) - a short film written, produced and directed by Ukpong and set in a speculative future - which follows an oilman who becomes torn between pursuing his industrial duties and hunting visions on the escalating environmental crisis. He finds his fate in the hands of a colony of indigenous people who live in a water environment and worship a sea goddess.

Over the course of 16 minutes, FUTURE-WORLD-EXV explores and re-imagines the art of filmmaking as an extended practice with a social focus. The film unfolds a poetic and fragmented dreamscape narrative, tied together with text, original musical scores, and interlays of archival footage in the absence of dialogue.

Coming to you from The Box in Blazing Century Studios, Nigeria, Ukpong and collaborators will combine the original soundscapes used in the film with interludes of spoken word, poetry, still images, and three-dimensional film props to create a meditative multimedia environment that explore the perceptual possibilities and relationship between sonic and visual experiences.

The performance will last around 30 minutes.

THREE: COMPOSING A CAUSE
A CONVERSATION

Following the performance, Wilfred Ukpong will be joined live in conversation with musicians and sound artists Professor Ray Lee and Hugo Tromp to discuss sound design and the process of producing speculative soundscapes. Before making the film, FUTURE-WORLD-EXV, Ukpong and Tromp spent over 24 months experimenting with various instruments and local sounds, to create abstracted sonic narratives based on a visual and psychological experience of the Niger Delta. During his early days in Oxford Brookes, Ukpong was particularly interested on Lee’s sound installations and performance projects which explore the invisible forces that surround us in our environment. Lee is currently Ukpong’s principal research investigator. is an interdisciplinary artist who incorporates a studio-based artistic practice with connective social engagement, tackling pertinent social issues with community participation and intervention. His long-term project in the Niger Delta, Blazing Century 1, received a special grant from the Prince Claus Fund and has been exhibited in international group shows in London, Lorient and The Hague. His film Future World won the Golden City Gates Excellence Award at ITB Berlin in 2018. The film has also been screened at Mash Johannesburg and David Krut Projects, as well as to the Senate of Nigeria in order to encourage a dialogue about environmental change in the Niger Delta. Ukpong is currently a Ph.D. candidate at Oxford Brookes University, and he received his BA and Master’s Degree from Ecole Supérieure d’Art Lorient, France. is an award-winning sound artist, theatre maker and composer. He creates spinning, whirling, and pendulous sound installations and performances that explore “circles of ether,” the invisible forces that surround us. His immersive and mesmerizing works such as the world-wide hit Siren, Ethometric Museum and his monumental outdoor works Chorus and Ring Out are a unique synthesis of art forms, both accessible and engaging for a wide audience.

His new outdoor work Congregation, for one hundred interactive sonic spheres, was funded by Without Walls and toured throughout the UK in 2019. His music-theatre work Ethometric Museum won him the 2012 British Composer of the Year for Sonic Art. Siren toured the world with significant British Council support. Force Field was awarded an honorary mention in the 2008 Prix Art Electronica. He is a Professor of Sound Art at Oxford Brookes University and an associate artist of OCM (Oxford Contemporary Music). is a music composer and sound engineer from the Netherlands, based in Berlin. He has worked in Ukpong’s Blazing Century Studios Nigeria from 2011 to 2014. He studied Music Production and Composition at the Prince Claus Conservatory in Groningen. He has composed music for some of the world’s leading brands and festivals and continues to explore his diverse skillset in his studio in Berlin. He combines the energy of electronic music and the emotion of acoustic instruments, to create compelling soundtracks for commercials, trailers and short films.

are final year science students in Government Secondary School Afaha Eket, Nigeria. They are budding professional dancers, actors and performing artists affiliated with Blazing Century studios, Nigeria. Emediong and her twin sister Ekemini appear as actors in FUTURE-WORLD-EXV, where they give a stunning performance. Both have performed in various street festivals and dance sessions in the Niger Delta.

HOW TO JOIN THIS EVENT

This event is free and will take place online only. Here’s how to join us:

1) Book a ticket on this webpage or Eventbrite. If you would like to make a donation to support Autograph’s arts and learning programmes, you can do this when you purchase your ticket. If you have any accessibility needs you would like us to be aware of, you can tell us on the booking form.

2) We'll send you an email confirmation of your booking.

3) This online event will be hosted on YouTube and Zoom. For the best experience, we recommend using the Zoom app on your computer. You can download the free software here. Or, you can access the event through your web browser without a download.

4) On the day of the event, we’ll send you a welcome email with a link to the event. You will be able to join for the start of the event at 6pm (BST).

If you have any questions, we’re here to help! Please get in touch.

Other images on page: Courtesy of the artists.